ARCHITECTURE | THE MONASTERY | NAPOLEON, THE RESTORATION | THE MINELLI FAMILY

The most stunning aspect of the complex is its structure: the wide rectangular courtyard, enclosed within perimetral buildings and walls; the double access through covered wooden gates, connected by an internal road. This recall of a rural architecture other than usual within Bolognese region countryside. Its most ancient representation, considerably different from the current one, has been reported as property of Bonfigli family and dates back to 1578. 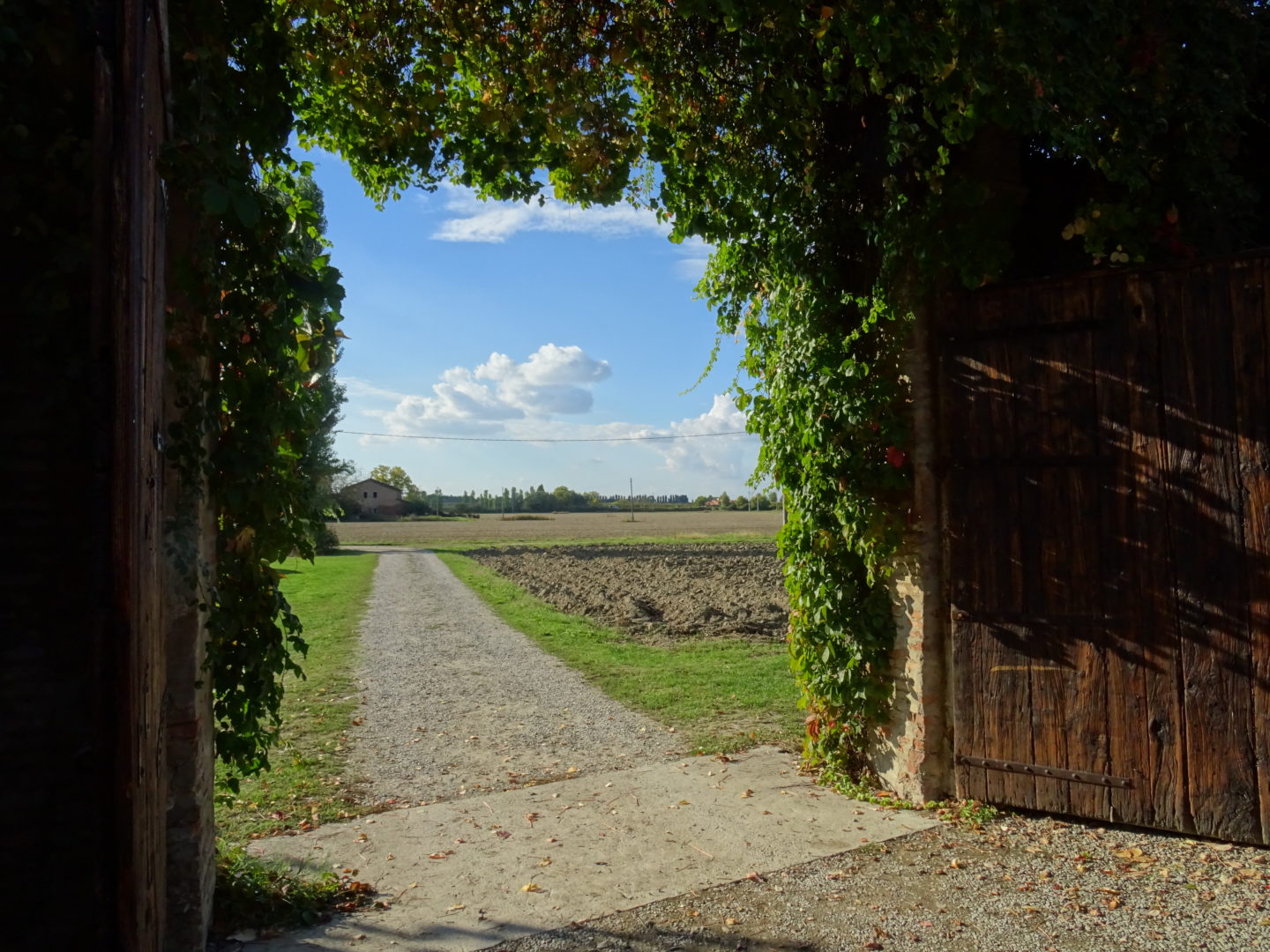 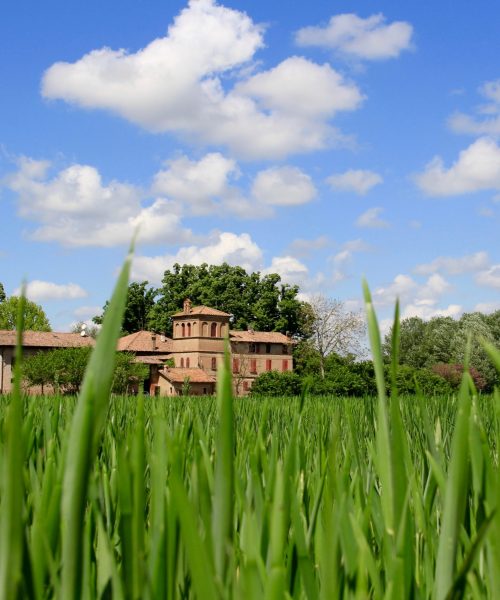 It was a massive building disposed over two floors and a mezzanine, covered by two wide slopes. The access was made through an imposing portal architrave. On the ridge of the gable, a turret decorated with three blind archlets dominates the complex. The tower remains the only element in common with the current building and clearly was included in the building during the XVIth century, similarly to what is found in the contemporary constructions still present in the rural area of the region. In 1684 the building complex consisted of many different buildings and was already surrounded by walls. On the west side, a “Covered gate” opened up on the walls, allowing for the access to a wide courtyard, around which were placed the different buildings: the long arcade on the southern side, and the master residence on the north-eastern side. On the eastern side, other service buildings were placed, such as horse stables, and another gate opened up on the garden.

The current appearance of the building complex nearly reflects the structure which dates back to the XVIIth century, right after the ownership was passed onto the monks of Saint Mary of the Angels: the walls still surround the set of buildings disposed around the courtyard.
On the north-eastern side we find the massive rectangular tower, composed of regularly ordered bricks, marked by a repetition obtained by other framed bricks sorted around the perimeter of the tower.

The top of the tower presents a set of blind arches which open at the center with windows. The tower, surmounted by a bell, originally used for communications with the farmers, confers to the building a touch of nobility still notable.

It is impressive the presence of the chapel, still consecrated, dedicated to the Assumption of the Virgin Mary, built in 1774.
On the back of the chapel, Alberto Minelli realized in 1922 a family mausoleum, originally meant to gather the remains of his son Luigi Carlo Minelli, cavalry officer who died during the Second Battle of the Piave River, during WW1.
The most recent changes have been completed by Alberto Minelli, great grandson of his homonym grandfather, who converted part of the structure to accommodation for tourists.

Bonfigli family was of noble and ancient origins, as they appear in researches which show that in 1194 they sold a house and a courtyard in Bologna, in the XVth century they owned either lands and a chapel in Castello d’Argile. Many other activities by the family have been found. For instance, the will of Pietro Bonfigli has been recovered, which dates to 1550, where he leaves his possessions to monks Cornelia, Camilla and Laura. One year later, a purchase paper has been found, about another land located in the Castello d’Argile (Bagno di Piano) area. This refers to the current location of the Palazzo. Subsequently, Andrea, Pietro’s heir, has been granted the concession of building a monastery in Via Nosadella (a road located in the city center of Bologna) by Pius the IVth, through a papal edict dated to 1565. Andrea enclosed 6 of his daughters in the monastery. 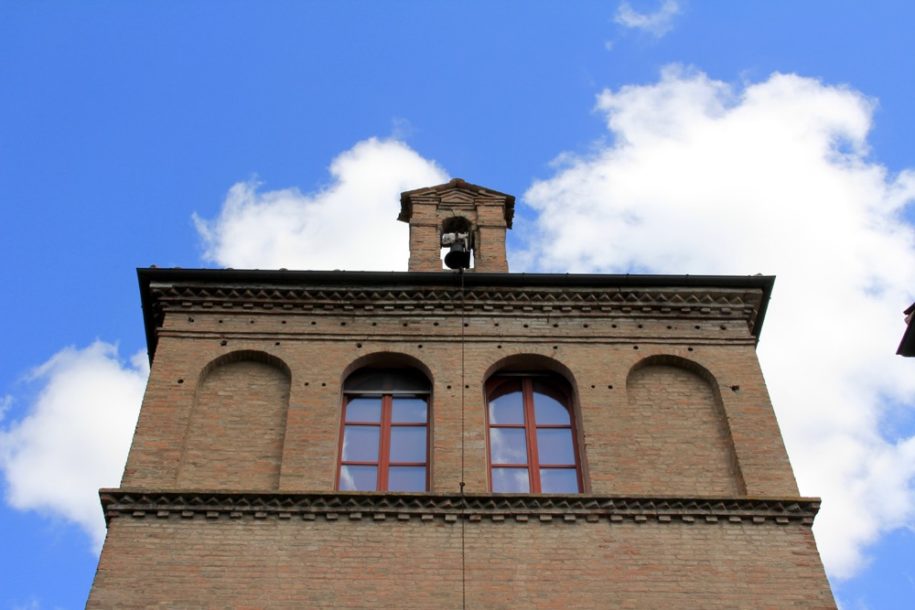 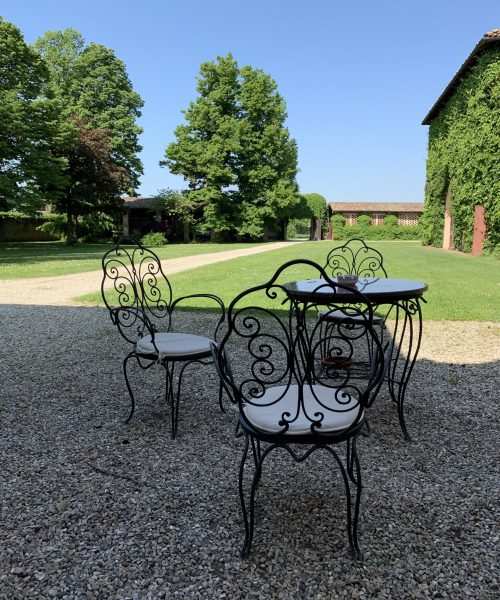 Subsequently, Andrea, Pietro’s heir, has been granted the concession of building a monastery in Via Nosadella (a road located in the city center of Bologna) by Pius the IVth, through a papal edict dated to 1565. Andrea enclosed 6 of his daughters in the monastery. At the passing of Andrea Bonfigli, the daughters were followed in the monastery by the mother, Giulia Paselli. In 1611 Paolo Bonfigli, the only male child of Andrea, who was the last Bonfigli alive, with no children, assigned the Palazzo of Bagno di Piano to the monks of S. Maria degli Angeli, which was the monastery where his sisters and mother belonged to. Since then, the complex of buildings located in Bagno di Piano became the summer residence of the monks of S. Maria degli Angeli. This origin explains the creation of the protected courtyard. Within the documents that testify the transfer of ownership to the Order of S. Maria degli Angeli, has been recovered the rental contracts which include the kinds of crops cultivated: canvas, grapes, etc. The religious order, owner of many terrains in Bagno di Piano, was in charge not only of the administration of the agricultural exploitation but also of the maintenance of the canals.

Napoleon, the restoration and the Minelli family

The monastic institution has been shut down in 1799 following the Napoleonic civil code. The monastery located in Bologna was on a first place rented to the monks who wanted to pursue a community life not cloistered. Later, in 1810, it has been sold. The properties in Bagno di Piano, which were seized as well, have been sold to Masetti family, now known as Masetti Zanini, between 1816 and 1820. Because of a wedding of one descendant of the Masetti Zanini family, around mid-nineteen century the villa and part of the lands were passed to the Minelli family, current owners.

The Mazurka of the Baron, the Saint and the Early Fig Tree (1975) A movie by Pupi Avati starring Ugo Tognazzi, Paolo Villaggio, Lucio Dalla and Gianni Cavina L’affittacamere (1976) A movie by Mariano Laurenti with Gloria Guida, Lino Banfi and Enzo Cannavale

AMAZON CIVILIZATION Findings, documents and pictures gathered during 15 expeditions in the Amazon basin by Alberto Minelli HISTORIC VEHICLES Cars and motorcycles restored and conserved, such as anAlfa Romeo Giulietta Sprint (1961), a number of Classic Range Rover and Mini(from 1974 onwards), a Jeep Willy’s M38A1 (1956) and Piaggio Vespas (1979).